Imagine a world without antibodies

It is hard to imagine a world without antibodies. Besides their natural ability to fight off diseases in animals, they are widely used by the scientific community as research and development tools. Antibodies, both polyclonal (pAb) and monoclonal (mAb), are well established and versatile reagent tools for the study of a wide variety of biological functions, 3D structure analysis, metabolic pathways studies, in vivo imaging, cell modulation, and quantification of a host of analytes. They are also used as therapeutic drugs and are amongst the biggest selling therapeutics making a significant difference to patients’ lives. 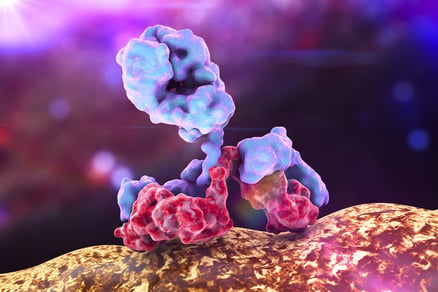 Antibodies are used to detect a wide range of biochemical determinants, including proteins, carbohydrates, lipids, nucleic acids and even some low-molecular-weight haptens. This versatility has allowed scientists to monitor biological responses, cell surface protein expression, the make-up and location of intra and extracellular proteins, as well as to detect other analytes and pathogens.

As reagents for biomarker and diagnostic assays, antibodies are used in a wide array of analytical methodologies, including immunoblots, ligand binding assays, enzyme-linked immunospot (ELISpot) assays, enzyme-linked immunosorbent assay (ELISA), radial immunodiffusion (RID), fluorescent microscopy, flow cytometry, and immunohistochemistry. Although it is not the focus of this series of articles, the remarkable success that monoclonal antibodies (mAbs) have achieved in the treatment of disease, should be acknowledged, where they are used to modulate the immune response, target antigens associated with disease, and switch cells on or off.

Polyclonal antibodies (pAb) have been used for many applications by researchers throughout history following the Nobel Prize winning article by Emil von Behring in 1890 which showed that the transfer of therapeutic serum from animals immunized against diphtheria could cure the infected animals. pAbs are the result of the stimulation of multiple B cells to produce antibodies directed against many different epitopes on a given antigen.

In 1975, Georges Köhler and César Milstein developed a process for creating monoclonal antibodies (mAb) where only a single self-replicating B cell was stimulated from one epitope. In many respects, this was the beginning of a technology to generate highly specific immunoreagents that has now become an integral part of the global healthcare industry.

Today, monoclonal antibodies are recognized as either therapeutic agents, or critical tools used routinely from early stage research through to clinical diagnostics. They enable the assessment of specific pathways and cell to cell interactions that can provide insight into defined cell populations, the individual markers they express and their function.

They are also critical reagents for assessing the performance and characteristics of novel pharmaceuticals, both large and small molecules. They have greater specificity than pAbs and are well suited to scientific applications like examining protein-protein interactions, phosphorylation, 3D structure, and other protein modifications.

Their unique specificity has made them ideal for medical applications such as diagnostic and therapeutic agents. However, in all cases a mAb’s utility is determined by both its purity and specificity. Purification assessments followed by extensive characterization and production protocols can be applied to identify and recover sufficient quantities of a specific monoclonal antibody that fulfills these requirements.